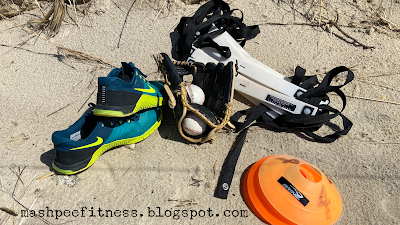 Cape Cod offers us some of the world’s best beaches and with almost 560 miles of coastline we can use these beaches to take our agility workouts to the next level.

Although research varies, training on sandy surfaces can have many benefits such as reduced impact during training on your joint surfaces, increased physical and metabolic demands, and increasing proprioception (understanding where your body is in time and space).

It is also important to understand that due to the unstable surface ground force production changes and alterations in form may occur. Some research has proven that sprint times have been shown to actually decrease due to altered running mechanics. It is highly important to start slow and to maintain proper body alignment if you want to reap the most benefit from your workout.

Clients should be primarily focused on explosiveness and strength of the movements as this is where the majority of benefits can be gained. With the exercises below, we are going to focus on Ladder Agility Drills that can improve lower body agility and explosiveness.

Forward 2 Feet In Each

Moving straight through the ladder quickly get both feet into a box before moving to the next one.

Lateral 2 Feet In Each

Moving to the right through the ladder quickly get both feet into a box before moving to the next one. Return back to the left.

2 Feet Out, 1 Foot Cross Behind “Scorpion”

Starting outside of the ladder on your left leg, perform single leg hop in and out of the ladder as you move forward. Return back on the right leg.