3 Local Runners will take on the 120th Boston Marathon

MASHPEE, MA—Joseph Carroll, Eric Wheeler and Christopher Qubeck are set to make the 26.2 mile journey from Hopkinton to Boylston Street on Monday, April 18, 2016 for the 120th running of the Boston Marathon.  All 3 men have different stories, experiences and reasons for running but they can all agree that it will be an honor to toe the line at the world’s oldest marathon and most prestigious running event. 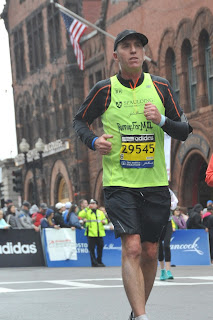 Joe has been running for over 30 years.  He joined an after work running club because he wanted to get to know a co-worker that was in the group.  It turned out to be a good decision because that person is his wife Kathy.  Together they co-own Cape Cod Rehab and will be celebrating their 30th wedding anniversary this year!

He continues to run as part of a healthy lifestyle.  Joe said that running “helps me manage stress, allows me to keep my weight in check and unlike some other sports I’ve played, I can continue competing into the future.”

Next Monday's race will be Joe’s 5th Boston Marathon and 6th marathon overall.  The Boston Marathon has been part of his life since his father began taking him to the race at age 6.  He said, “It is a thrill and an honor to participate in Boston, a world class event.  Boston Strong.”

Joe is running on the Boston Children’s Hospital Miles for Miracles Team and pledged to raise $7,500.  “With the help of many people, I have surpassed by goal.  I am teamed up with a patient partner, Nathaniel, who is a 5 year old with Cystic Fibrosis.  I am running for Nathaniel and other kids who are unable to run.  I worked for BCH while in college and have a great respect for the amazing work done there,” said Carroll.

Here’s how you can donate and help Nathaniel beat Cystic Fibrosis:
http://fundraise.childrenshospital.org/site/TR/BostonMarathon/BostonMarathon?px=1352425&pg=personal&fr_id=1390

Joe’s training for Boston has been challenging.  He had to rehab 2 injuries this winter but will head to the starting line feeling good.  His motto: “Pain is temporary.”  He added that his goal for the race is to “represent BCH, Nathaniel, my family and all of my supporters to the best of my ability and to cross the finish line with a big smile.” 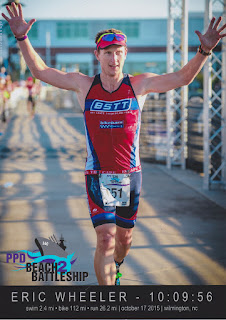 Compared to Joe, Eric is relatively new to running.  In almost 6 years of running, he has an extensive list of athletic accomplishments including 2x Ironman finisher with a PR of 10:09:05.  A Physical Therapist at Cape Cod Rehab, Eric started running when almost everyone he knew at work was excited about the 2010 Falmouth Road Race.  He registered for the Falmouth in the Fall race that year to lose weight and get healthier to set an example for his kids.  He sees running as a journey of self-discovery.  “How hard can I push myself?  I enjoy the places my mind goes when I’m running.  It’s an escape from daily pressures that we all face.  Running makes me feel good about myself,” said Wheeler.

Eric has run 7 marathons to date but this will be his first Boston Marathon.  He earned his way into the 2016 Boston Marathon by running the respected Boston Qualifying Standard with a 3:06 at the Providence Marathon in May of 2015.  Eric could not put into words why Boston is so special to him, “It’s hard to explain.  It’s Boston—the hub of the universe.”

When asked about his training, Eric also used the term “challenging.”  As he reached his peak weeks, Eric was diagnosed with a core muscle injury and will be going in for surgery 3 days after the marathon.  This may stop some from running but not Eric!  He may be in pain the entire 26.2 miles but his goal is to “give the best effort I can, have fun and enjoy the day.” 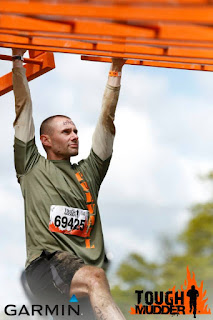 Chris is a member of the Mashpee FitnessCenter and one of Eric’s past patients at Cape Cod Rehab.  He will be running the Boston Marathon for the second year in a row, both times he received an invitational entry from the Massachusetts National Guard, where Chris works full time in the communications field.  He has run 3 total marathons (all in 2015); his first full marathon was Boston last year.

Chris ran his first 5k while at Air Force Basic Training back in the late 90’s.  He always enjoyed running but said it was one of those things that fell off the radar between college and the military.  Friend and Mashpee Fitness Center trainer, Jen Skiba, talked him and his wife into running the 4th Annual Piggy Trot in Osterville and he realized that running was something that he really missed and wanted to get back into.  Since the Piggy Trot in May 2013, Chris started finding local races on the weekends and before he knew it, he was hooked!

There are many reasons why Chris runs.  While he enjoys getting outside, exploring new places and physically challenging himself, he also feels like it’s a great way to decompress after a tough day.  He added, “Running has been extremely therapeutic for me, having been deployed for Iraqi Freedom twice since 9-11.”

In an email, Chris was asked why the Boston Marathon was so special to him.  This was his response:

“Being full time Air National Guard and working in the communications field, part of our job is to provide communications (internet, phone, and radio support) to first responders.  We’re utilized during hurricane and snow storm response as well as the Boston Marathon every year.  In 2013 we supported the Boston Marathon as we’d done for many years prior.  We set our gear up with the Army National Guard folks over in Rehoboth, MA.  Early afternoon Marathon Monday, things appeared to be wrapping up with the race so we began packing up our equipment, and it was a good thing we did.  We were just about finished packing our trailer when one of our Army counterparts came outside and said that something serious just happened.  We all rushed inside to find out that at least one explosion, maybe two, went off right by the finish line on Boylston Street.  We finished packing up our gear and received State Police escort into downtown Boston.  We set up our tent and communications gear out on Boston Common where we operated for the next 26 hours straight, providing emergency communications to whomever needed it.  So ever since that horrific day, I’d had it in the back of my mind that I wanted to run that race someday.  Through a Massachusetts National Guard program, I was able to apply for and receive an invitational race bib.  This marathon is THE one race on the planet that just about every runner dreams of doing some day, and I was extremely lucky to have had the opportunity to participate as a runner versus a supporter in 2015, and now again in 2016.  It’s an absolute privilege and an incredible honor to be able to run the most historic race on the planet once more.”

While training never seems to go as well as he’d like with the time he has available, Chris feels very confident he won’t have any issues finishing.  He would like to run around 4 and a half hours but really would be happy to just cross the finish line.


Blog post by Jen Skiba.
Posted by Mashpee Fitness at 3:35 PM No comments: 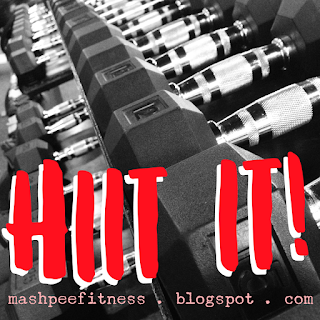 There is an exercise method for everything you could think of. But really! For those of you looking for a workout that doesn’t take up a lot of time or if you want to switch up your routine, try a high intensity interval workout.

Commonly called HIIT for short, High Intensity Interval Training is exactly what it sounds like- intervals of high intensity work with periods of rest. Research shows that HIIT can improve blood pressure, insulin sensitivity, and improve both aerobic and anaerobic fitness. HIIT is a great cardiovascular workout that can also help you lose body fat while still working your muscles hard. Most of the intervals are determined by a percent heart rate max, typically 80% or more. The rest time- which can also be an active rest period- is different depending on fitness levels and the amount of recovery needed for that given effort. The basic rule is the higher the intensity, the shorter the speed interval.

So why does HIIT work? Working at a high intensity causes your body to need more oxygen and more energy. Typically, HIIT sessions are about 20 minutes in length. Because this method of training demands more energy and oxygen, it takes longer for your body to recover and your body can still be burning calories at a higher rate than normal even after you stop exercising. This is called excess post-exercise oxygen consumption, or EPOC, and can help you lose body fat or even help maintain a healthy body composition. Working a HIIT session into your routine regularly can help you feel more energetic.

If you have never tried a HIIT session before, make sure you find a fitness professional to help guide you and build a training regimen that works best for you. This type of training isn’t for everyone since it is done at such a high intensity. There are many different types of HIIT programs as well, so find the one that meets your needs and make sure your program is safe and effective!

Blog post by Nikki Courtney.
Posted by Mashpee Fitness at 10:39 AM No comments:

The Titleist Performance Institute (TPI) calls the glutes the “King of the Golf Swing.”  Why?

Your glutes play a very important role in the golf swing.  Two words:  Power and consistency.

One of the main roles of the glutes is to stabilize the hips.  In the golf swing you generate power from the ground up.  To maintain power throughout the backswing, your glutes must maintain pelvic stability as you internally rotate on the back leg and your upper body rotates.  Stability is also important to allow rotation in the downstwing and the follow through.  If you’re lacking stability, your consistency will suffer and it could even lead to some swaying and sliding swing characteristics.

If your glutes are not firing properly, other muscles may compensate and could also lead to overuse injuries of the hamstrings and lower back.

Strengthen your glutes for more power and consistency!  Here are 3 glute exercises to try…

What: Glute Medius, Hip External Rotation
How: Lay on your side with your knees bent and your legs stacked on top of each other.  Keep your feet together and lift your top knee as far as possible without rocking.  I like to suggest putting your hand on your hip so you can feel any rocking.  Try 2 sets of 10 repetitions then repeat on the other side.

What: Hip Internal Rotation
How: Lay on your side with your knees bent and your legs stacked on top of each other.  Keep your knees together and lift your top foot as far as possible.  Try 2 sets of 10 repetitions then repeat on the other side.

What: Glutes
How: Lay on your back with your knees bent and your feet flat on the ground.  Lift your hips off the ground.  Hold for 1-2 seconds then lower.  Try 2 sets of 10 repetitions and focus on using your glutes.  If you feel your hamstrings, your glutes are not firing correctly!

Blog post by Jen Skiba.
Posted by Mashpee Fitness at 6:00 AM No comments: